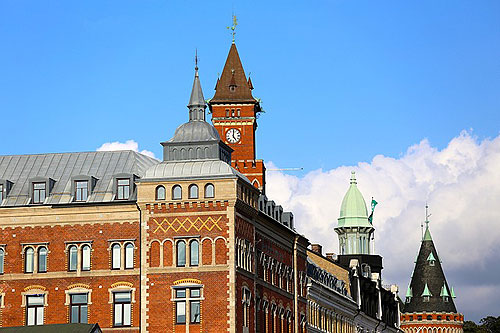 If you fancy starting a new life in a new country, then Sweden is one of the most popular choices. Its stunning scenery and healthy lifestyle means it has been rated one of the happiest countries in the world.

The Moving Partnership Ltd are experts in arranging removals to Sweden, through our partnerships with leading removal companies in Scandinavia. We can help you move to a whole range of destinations in this highly desirable country, including Helsingborg, which is among the country’s top ten largest cities.

There has been a permanent settlement here for almost 1,000 years, with the first recorded presence was in 1085. However, it is only in the last 150 years that the population has started growing, thanks to heavy industry bringing jobs and people to the region.

These days the population stands at just over 100,000, making it the ninth largest city in the country. Its major employers include world-famous furniture retailers IKEA, which has an international base here; and Nicorette, the nicotine chewing gum, which has a factory there.

Transport and Getting Around

Helsingborg lies on the eastern side of the Oresund Strait. On the other side, around two miles away, is Denmark. You can easily see the Danish town of Elsinore, also known as Helsingor, across the water. Much of the city’s and country’s history are intertwined; even today, the Helsinborg to Denmark ferries take large numbers of people, many of them tourists, and cargo across the water. Despite the modern Oresund Bridge, between the Danish capital Copenhagen and the Swedish town of Malmo to the south, the crossing is still very busy.

Helsingborg’s nearest airport is Angelholm-Helsingborg, which is about 35km from the centre of the town. However it only handles domestic flights. It is probably the best bet if you want to get to the Swedish capital Stockholm, which is more than 550km away. Malmo, at 90km from Helsingborg, and even Copenhagen (105km) are the nearest for international destinations.

The Swedish commitment to public transport means Helsingborg’s train and bus services are excellent and fully integrated, with virtually all services going through the main train and ferry termimal called Knutpunkten.

If you do come in over the water, one of the first things you will see is the Karnan or Kernel. This imposing 35metre high tower is all that remains of Helsingborg Castle and still offers superb views of the town in one direction, and Denmark in the other.

If you enjoy the arts, then the Concert Hall, which was designed in 1932, is home to the town’s Symphony Orchestra and has a varied programme of classical music. The Dunkers Culture Centre, or Kulturhuset, plays host theatre and dance productions as well as concerts. It is a doubly useful building as it is also the home of the Helsingborg Tourist Information Centre.

If you visit the Fredriksdal Open-Air Museum, you can see what life must have been like in 19th Century Scandinavia. The large site also includes a botanical garden and a Print Museum which is believed to be the largest one dedicated to the subject in the whole of Scandinavia.

Shoppers after big brand names will probably want to head out to the Vala centre on the outskirts of the town. The central, pedestrianised area of the town offers more of a mixture of traders. Pottery and ceramics are among the local traditional specialities.

As a major international gateway, Helsingborg has quite a cosmopolitan feel, and this is reflected in the culinary scene. The foreign influence means you should be able to find whatever sort of international cuisine you want, and that includes fast-food outlets.  Locally it is known as the gastronomic centre of Sweden, because of the number of top chefs who ply their trade in the town. However, the quality may come at a price and Sweden is one of the more expensive countries of the world to eat out in.

Whether you are moving to Sweden for personal or business reasons, Moving Partnership Ltd will be able to provide a competitive quote for you. We look at hundreds of quotes for removals to Sweden to find the best price and service for you. Our network of partners are all industry-accredited. Click on the link find out which other places in Sweden we can help you move to. We can also help you with removals to a range of other European and international destinations.