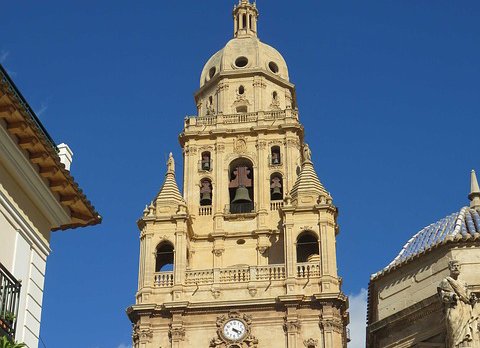 Murcia is the 7th largest city in Spain and lies in the south west of the country, about 25km from the Mediterranean Sea. Murcia is also the name of the surrounding province, of which the city is the capital. The area has become popular with British settlers due to its proximity to the resorts of Alicante and Benidorm which lie 50-70km to the north and, of course, the island of Ibiza which is just to the east. The Moving Partnership Limited undertake frequent removals to Spain, delivering to all cities and regions, including Murcia.

Moving to Murcia has proven to be increasingly popular with British people who not only want to live within easy reach of the coast, but also want the benefits of living in a good sized city with all the culture and amenities on offer there.

The city of Murcia has a population of around half a million, with an additional 700,000 or more residing in the adjoining suburbs. It has a typically warm Mediterranean climate with hot summers, mild winters and very little rainfall.

A Short History of the City of Murcia

The city was founded in the 9th century AD by the emir of Cordoba, who saw the potential for agriculture due to the presence of the River Segura. Although the region is semi-arid, the Segura valley creates a fertile area, which was enhanced with the building of irrigation channels, enabling the abundance of fruit and other agricultural production which persists to the present day.

Over the next few centuries the city was ruled by a variety of different leaders and continued to grow, becoming increasingly prosperous. As well as agriculture, the city became famous for ceramics, silk and paper-making – and even established its own currency.

From the 14th century, the city's fortunes waned significantly, due to a shift from the Mediterranean trade to the Atlantic after the discovery of the New World. However, it underwent some prosperous periods, most notably a boom in the silk trade in the 18th century, which helped to build many of the currently visible landmarks.

The River Segura has been both a blessing and a curse to the city at different times, being the source of its agricultural wealth and also the source of several flooding disasters in the 17th, 19th and 20th centuries.

Murcia is well set up for international travel, with its own airport (Murcia–San Javier) 17 miles south of the city. There are frequent flights throughout the year to London Gatwick or Bristol, and to additional UK destinations during the summer season, making it easy to stay in touch with relatives back in the UK. In addition, there is Alicante airport to the north, which has flights to a wider range of UK destinations including Glasgow, Manchester and Luton.

There are regular bus services around the city, and out to other major destinations such as Alicante, Malaga and Madrid, all connected by major roads. The main railway station is named Murcia del Carmen, and lies to the south of the city, within walking distance of the city centre. There are trains connecting Murcia to Alicante and further points up the east coast, to Madrid to the north-west, and to Malaga to the south-west.

As Murcia is fairly small and compact, getting around within the city’s limits is best accomplished by bus, bike or taxi.

Murcia has been given the informal title of the "Baroque Capital of Spain", due to its many ornately decorated buildings constructed in the 1700's. The most famous of these is the Cathedral of Saint Mary, which was originally built in the Gothic, pre-Renaissance style in the 14th and 15th centuries, but which was later embellished with a baroque façade in the mid 18th century. The Cathedral complex includes an impressive 300ft high bell tower which was built over the course of 250 years and whose architectural style, as a result, can best be described as a "melange" (featuring Renaissance, Rococo, Neoclassical and Baroque features). The tower houses no fewer than 25 different bells, some of which have been in place since the 17th century. An older, 14th century bell is no longer used but can be seen in the Cathedral Museum, which contains a number of religious artworks and archaeological remains found at the site.

The Cathedral can be found in Plaza Cardinal Belluga, which is also the site of the Bishop's Palace, another highly decorative building. Additional Baroque splendours include the Glorieta (the landscaped city square), and the Puente do los Peligros, an 18th century stone bridge crossing the Segura.

Equally striking, but in complete contrast, is the City Hall which is directly opposite the Cathedral and is a modern, minimalist building in stone.

Most of the old town centre is now pedestrianised, making it a relaxing place to wander about and do some shopping. Off the Plaza Cardinal Belluga are Murcia's traditional shopping areas – Traperia Street and Plateria Street – where you will find clothing boutiques, jewellery and souvenirs, as well as bars and cafes.

If you are living here after your removals to Spain, there are two modern shopping malls in the city – Thader Mall and Nueva Condomina (which claims to be the largest shopping mall in Europe). These are home to many recognisable brands such as Primark, Zara, H&M and Mothercare. There is also a huge branch of El Corte Inglés in the city, a large department store chain offering the typical range of divisions, including men's, women's and children's clothing, electronics and homewares.

If you want to buy some of the local produce, or pick up a bargain, head to the city market which takes place every Thursday until 2pm behind El Corte Inglés.

Food and Drink in Murcia

Murcia is a real gourmet's delight and a great place to find authentic Spanish cuisine. The surrounding region is primarily a rich agricultural area producing a number of fresh fruit and vegetables, as well as its own wines, which are predominantly red and full-bodied and tend to feature the Monastrell grape, also known as Mourvedre.

There is a strong emphasis on rice dishes (not just paella), heavily influenced by southern Spain's Moorish past. While fish and meat are popular, and there are just as many tasty vegetable options on offer, ranging from grilled vegetables to wild mushrooms, goats cheese, pumpkin, almonds and more.

Removals to Spain – Contact us for a free quote here.