International Removals to Spain - About Zaragozan 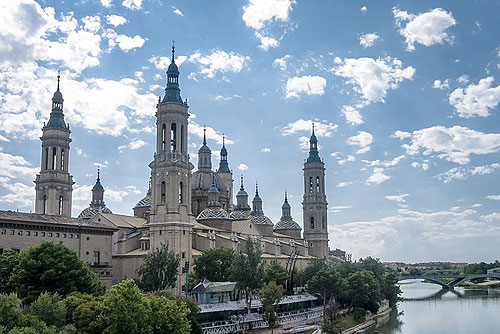 Rich in history, Zaragoza is home to one of the most reputable universities in the world, which has much to do with the city’s thriving nightlife. Based in northern Spain, half-way between Madrid and Barcelona, it is an expanding metropolis that has seen much development since it hosted the 2008 Expo, which plunged it into the international spotlight. If you are organising removals to Spain to settle in Zaragoza, as a foreigner you won’t be alone as the city is home to a number of English speaking expats, who have moved here either to study at the university or to work in education.

Meanwhile, if you are hunting the best prices for your overseas removals, the first port of call is to contact The Moving Partnership Limited. We partner with removals firms all over the world to find you a company that will provide you with a reliable service at competitive rates. And, with many years of experience in the removals industry, we have had thousands of satisfied customers from the UK, Spain and further afield.

International Removals to Zaragoza – Click on the link to find out more about low cost, high quality removals to all major towns and cities in Spain.

If you are moving house to Zaragoza Spain, this beautiful cosmopolitan city, which lies on the banks of the Ebro River, has plenty to occupy you. From its lively nightlife to it numerous tapas restaurants, superb architecture, glorious cathedrals, churches, ancient sites, festivals, and museums, moving here means you can enjoy all the best that Spain has to offer with the added benefit of a slower and sunnier pace of life.

A Brief History of Zaragoza

Zaragoza, also known as Saragossa, has a history that dates back to Roman times; indeed, its name derives from the Emperor Caesar Augustus. In the 700s the city was controlled by one of the four major Islamic Caliphates established after the death of Mohammed, and it became the largest Muslim controlled city in northern Spain. Over a 100 year period, from 1018, it became one of the Taifa kingdoms, an independent Muslim state, until it was conquered by the Aragonese and transformed into the capital of the Kingdom of Aragon. Fast-forward to the present day and this historic city is continuing to expand, and now has a population of almost one million.

Things to do in Zaragoza

Zaragoza is surrounded by desert, but despite being an isolated city there still plenty of things to do here once you have settled. Plaza de la Seo and Plaza del Pilar house the city’s two cathedrals: La Seo, which has several medieval tapestries, and the nearby El Pilar, which is the main cathedral, named after the pillar on which the Virgin Mary appeared. If you like history, another popular must-do is to visit the Aljaferia, which is a stunning restored Moorish castle. Alternatively, you can delve into the city’s Roman past and see the amphitheatre turned museum. However, if you are setting aside time to visit any of the museums, it is worth bearing in mind that many of them close on Mondays and Tuesdays.

Further afield, Aragon is famous as the birthplace of Goya. So, if you are an art-lover, in addition to the Museo de Zaragoza which houses a Goya exhibition, there is the Goya trail to discover. Here, you have the chance to retrace the artist’s steps and visit the small village of Fuendetodos, where he was born; the house of his birth is also home to the Museum of Etchings.

The main shopping areas in Zaragoza lead from Residencial Paraiso to Plaza de Espana, and there are several upmarket designer shops in and around the streets of Francisco de Vitoria, Cadiz, Isaac Peral and Ignacio de Loyola. If you like hunting regional specialities, including fish, cheese, ham and vegetables at great prices, Lanuza Market, otherwise known as Central Market, is the place to go. Or, if you are just looking for artwork for your new home, Plaza Santa Cruz has a Sunday open-air market, where you can find all sorts of gems created by local artists. You can also find a host of items for you, or your home, at knock down prices at the huge open air market behind the La Romareda Football Stadium.

Food and Drink in Zaragoza

Zaragoza is known for its tapas bars, of which there are plenty. It also has some great regional specialities, including Cordero a la Pastora, shepherd’s style lamb, Bacalao al Ajoarriero, cod-fish with eggs and garlic, and chorizo sausage. Meanwhile, if you like fine wines, Zaragoza is close to a major wine producing area, so it presents some excellent opportunities for wine tasting.

It’s easy to get about in the old town by foot. You can also travel to all areas of the city by bus for a flat fare, or by taxi at reasonable rates.  If you want to travel further afield, Zaragoza is just a three hour coach or train journey to Barcelona and Madrid. And, to visit relatives back home, the airport is just 10 km from the city centre and has flights to and from London Stansted, and to other destinations via Ryanair, Iberia and Air Europe.