Moving to Australia - How to Celebrate Christmas

Christmas for most people across the world means snow as well as Santa – but what about Australia, when the holiday season is in the height of summer?

The Moving Partnership can help supply competitively-priced removals packaged for all parts of Australia, including Sydney, Melbourne, Adelaide, Brisbane and Perth. Here we look at five of the key differences – and similarities – between Australia and the rest of the world at Christmas.

A Season for Sport

The summer weather means that everyone has the chance to either watch or take part in some sort of sporting activity. For cricket fans, the Boxing Day Test match is a must, with thousands of people heading to the Melbourne Cricket Ground to watch the national team play. The largest attendance on record is just over 90,000 for the Ashes clash against England in 2013. Millions more watch the coverage on TV.

The Sydney to Hobart yacht race is also held on Boxing Day. Hundreds of maxi yacht owners and weekend racers of all ages start out in Sydney Harbour and race across the Bass Strait to the Tasmanian capital. Most competitors aim to finish the 630-mile course in about 40 hours, and thousands of spectators line the start and the finish.

On Christmas Day in the UK you might see a few intrepid early-morning swimmers go for a chilly dip in the sea for charity, but in Australia you are more likely to see a surfer wearing a Santa’s hat riding the waves.

In Australia, Christmas dinner is usually called lunch as it’s held in the middle of the day. Turkey and chicken are still the most popular meats for this meal, but usually these will be served cold as it’s too hot for a roast dinner in summer.

Prawns, lobster, crayfish and oysters are often chosen as an alternative to the traditional Christmas lunch, with many Aussies preferring to break out the barbecue in the garden rather than cook indoors. For dessert, Australians opt for something lighter than Christmas pudding, opting for a fruity pavlova or trifle instead. 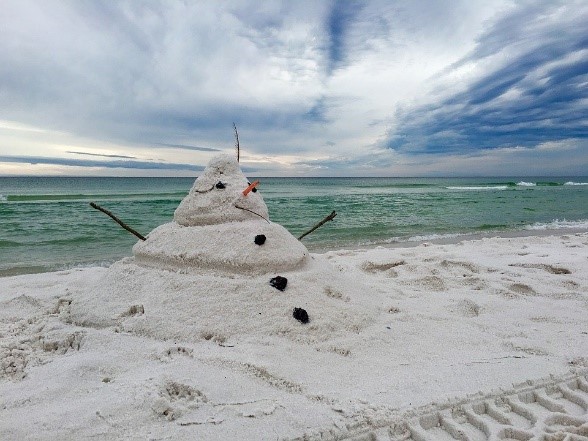 As it’s the middle of summer, there’s no chance of having a snowball fight or building your own snowman in the back garden. However, Australians still honour this Christmas tradition by creating a sandman at the beach – although it’s more likely to be washed away than melt!

Different Decorations Down Under

While some families put up a traditional Christmas tree, others prefer to decorate their homes with a Christmas Bush, a native Australian tree. Its cream-coloured flowers turn a vivid red over the festive period. Other plants used to decorate Australian homes at Christmas include ferns, palm leaves, poinsettia plants and evergreens.

Many of the ways in which the Australians celebrate Christmas and the New Year will be familiar to people in the UK and around the world. Children still put food or drink out for Father Christmas and his reindeer on Christmas Eve, and on Christmas morning they will find the stocking they have placed on their bed full of small gifts. The main exchange of presents from family and friends usually takes place later in the day.

Just like in the UK, there is a long tradition of carol singing in Australia. Many city-dwelling Australians attend Carols by Candlelight in the run-up to Christmas. These are held in public parks and outdoor venues and can feature celebrity performances. And there’s no cold weather to worry about, so families pack picnics and mosquito spray rather than flasks of hot coffee.

Moving to Australia Quotes from The Moving Partnership

If you are considering moving to Australia, and you would like to receive quotes from The Moving Partnership, all you have to do is follow this link and fill in the online form. We ship to all major destinations, including Sydney, Perth, Brisbane, Melbourne and Canberra.

We will compare a range of different quotes free of charge and come up with the package and price which best suits your budget and your individual requirements. We also offer video surveys.

Most of our partners are members of the British Association of Removers, or are a Fidi Accredited International Mover, so you can be sure of a high standard of service when you book with us.